About the Author: James Moule

James Moule is a professional guitar tutor (BMus (hons) who was musically trained at the London College of Creative Media (‘LCCM’), having studied advanced music performance and production, and also receiving mentoring and tutoring from master guitarist Stefan Joubert at The London Guitar Institute from an early age - becoming very proficient at his craft in terms of music theory and mastery of the guitar fretboard. James’s interest in music is wide-ranging across the genres with a passion for all things guitar. James is lead guitar in various bands and undertakes session work, music production, writing original music and very much enjoys performing live. James enjoys meeting people, sharing his passion and helping others to enjoy this exceptional instrument in a friendly and encouraging manner.

The pentatonic scale is the world’s most useful scale. It works with over everything in every style of music in existence. Almost every type of musician in the world all uses the scale either at some point in their lives or incorporates it into their playing.

If I was told to play only one scale for the rest of my life, it would be the pentatonic scale that would serve me best.

So what is the pentatonic scale?

To answer that we first need to know what a scale is.

A scale is a series of notes and each note becomes an interval (distance between notes). Notes in a full scale are either a tone/ whole-step (two notes up/ down) or a semitone/ half-step (one note up/ down).

“Penta” in the word ‘pentatonic' is greek that translates to ‘five’.

What makes the pentatonic scale work more universal compared to other scales is that it targets and uses five specific notes of a full seven-note scale that can be used over any major or minor progression.

One way you could look at this is that it’s a simplified version of the major and minor scale because we’re tackling five specific notes that still gives us that major/ minor quality.

When you’re playing a solo using a full scale, for example, chances are that there are notes in the scale that sound like they are wrong notes.

If you’d played one of those notes at the wrong time you could cause unwanted tension, even to a beginners ear that could make them think that they did something wrong.

That’s why pentatonic scales are the most used because you can never go wrong.

Any note of the scale you hit at any moment in any order is difficult to sound bad with.

Now that we know what a pentatonic scale is, the next question is now how to make them.

Starting with the major we first take a major scale and target five notes from the scale to give us the major pentatonic formula. In this case, we’ll use the C major scale. C major consists of seven notes: ​C, D, E, F, G, A, B ​and back to ​C​.

To make a minor pentatonic scale we do the same method we used for major but we are going to target different intervals or steps.

We’ll be using the A natural minor scale because it uses the notes as C major scale but starts on the note A or the 6th step.

Finally we now come to the question on how to use the pentatonic scales.

Because we’re playing with 5 notes from a major/ minor scale, pentatonics are excellent for improvisation.

The five positions of the minor pentatonic scale 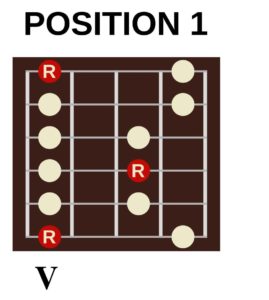 The pentatonic scale in the first position with the root notes located on string group 1,4 & 6 is the MOST used scale in the world of guitar playing.

It is a really easy position and most beginner electric guitar students use this scale exclusively.

I would personally recommend learning and mastering ALL the positions, however, this is an easy starting point. 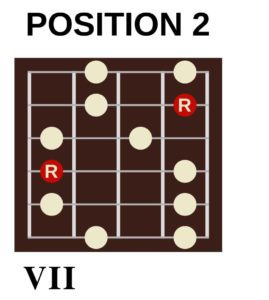 It is ideal for blues bends, vibratos and legatos especially on string group 123. 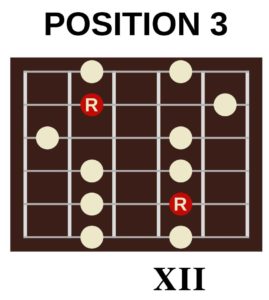 The third position is an underutilised position. Most players stick primarily to position 1, 2 and 4. It is absolutely worth exploring. It is especially useful and offers some great opportunities on the bass strings! (String group 456)

Of course, you can also find plenty of good licks and lines on strings 123 and all string groups! 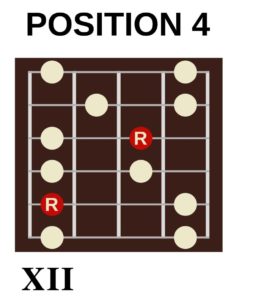 This position is the second most used pentatonic position and is akin to position 1!

It is pretty easy to use and to get your head around.

It is great for bends and for playing really cool blues licks! 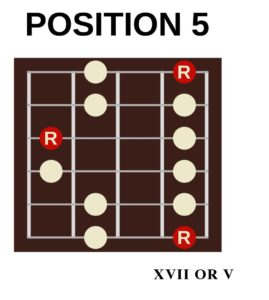 Ah… the most underutilised position of the pentatonic scale!

It is a real shame, as it really offers some incredible hidden gems in terms of licks and lines.

It is definitely worth exploring and will make your solos and guitar improvisations SO much richer and deeper!

Go ahead – spend the time and make position 5 part of your guitar repertoire for improvisation!