How to practice the guitar effectively

About the Author: Stefan Joubert

Master guitar teacher and player Stefan Joubert is the founder of The London Guitar Institute. He cordially invites all guitar lovers from absolute beginner to advanced to come and learn how to play the guitar with his excellent teachers! He also offers lessons online via Zoom and Skype as he is based in the UAE in Dubai.

One of the biggest obstacles to becoming a proficient guitarist is not knowing how or what to practice. Practising is as much an art as learning the guitar itself.

Masters of the guitar know how to practice effectively; they know how to break down their time into workable segments to work on different areas of their guitar technique and performance.

Guitarists who struggle to improve their playing probably have a lack of understanding of how to practice effectively.

Efficient and effective practice can increase your guitar skills and knowledge more than fourfold in a single year. Basically, by practising the guitar efficiently, you would gain four years of learning in one.

So you might wonder – how do I practice effectively, what is the secret?

Well, firstly it will depend on your current level and your what your goals are going forward.

I will demonstrate three scenarios with practice schedules based on three different levels of guitar playing:

In this scenario, we have a complete beginner who has just picked up the guitar about three months ago. He is working in a professional insurance company and has remarkably little time to practice. The best suggestion would be to manage three sessions of 45 minutes weekly.

By following a practice schedule, he will progress in the fastest way possible.

Now analyse the effectiveness of Example A:

Firstly there’s no warm-up – no time to acquainted with the instrument again. This leads to frustration as one’s hands are just not warm enough to produce a decent enough sound out of the instrument. The second issue is that the student goes directly to his favourite repertoire aka the “musical dessert”. This method is not sound as more severe problems are to be resolved elsewhere.

Practising his chords for 5 minutes is not a bad thing, but it in Scenario B (the scenario to follow) it’s structured before the student enjoying his “musical dessert”, and hence the focus on the chords (i.e. problem) will be far more effective than in Scenario A.

Lastly, the student gets back to playing his repertoire as it brings him joy and happiness instead of frustration. Working on a problem can usually bring a lot of frustration before the solution is found. Therefore, the student prefers going back to the “musical dessert” instead of working on solid food. This is usually counter-productive unless a “fun session” was pre-arranged.

I believe that there is a time for the learner to have fun on his instrument, but once again this ought not to take precedence over the regular practice sessions that the student must benefit from.

This is an example of a well-thought-out practice schedule suitable for a beginner in a particular set of circumstances.

The first thing I genuinely appreciate is the fact that the student takes five minutes to warm up before starting with his various other activities.

After the initial warm-up, he goes straight into practising new chords. Although it might be frustrating and challenging, he continues for 10 minutes and faithfully applies himself.

He then continues unto scales, meticulously practising them at 60 BPM (beats per minute). This leads to obtaining a more excellent command over the fretboard that will compound and explode over several years!

After practising his chords, scales and arpeggios, he moves unto strumming that’s relevant to his chord repertoire. By practising with the right hand alone, he gets a full view of what’s going on. This enables his strumming hand to work like a well-oiled machine, ready to strum any chord pattern that comes it’s way!

ONLY right at the end does he enjoy his favourite musical dessert – the repertoire that he so badly wants to play! In fact, it’s easy for him – his right hand is strumming faithfully while his left-hand plays the chords without much hesitation – THANKS TO STICKING WITH A DISCIPLINED PRACTICE SCHEDULE!

Practising in this way will yield a harvest over several months/years that far outweighs the proceeds of Scenario A!

I recommend any student (whether absolute beginner, amateur or professional) to practice the guitar with a schedule and not without. I believe there are times when practising without a program can be justified (as playing music should not be arduous at all times), but (in my opinion) 85% of the time a reasonably strict schedule should be adhered to, to obtain the best results possible! 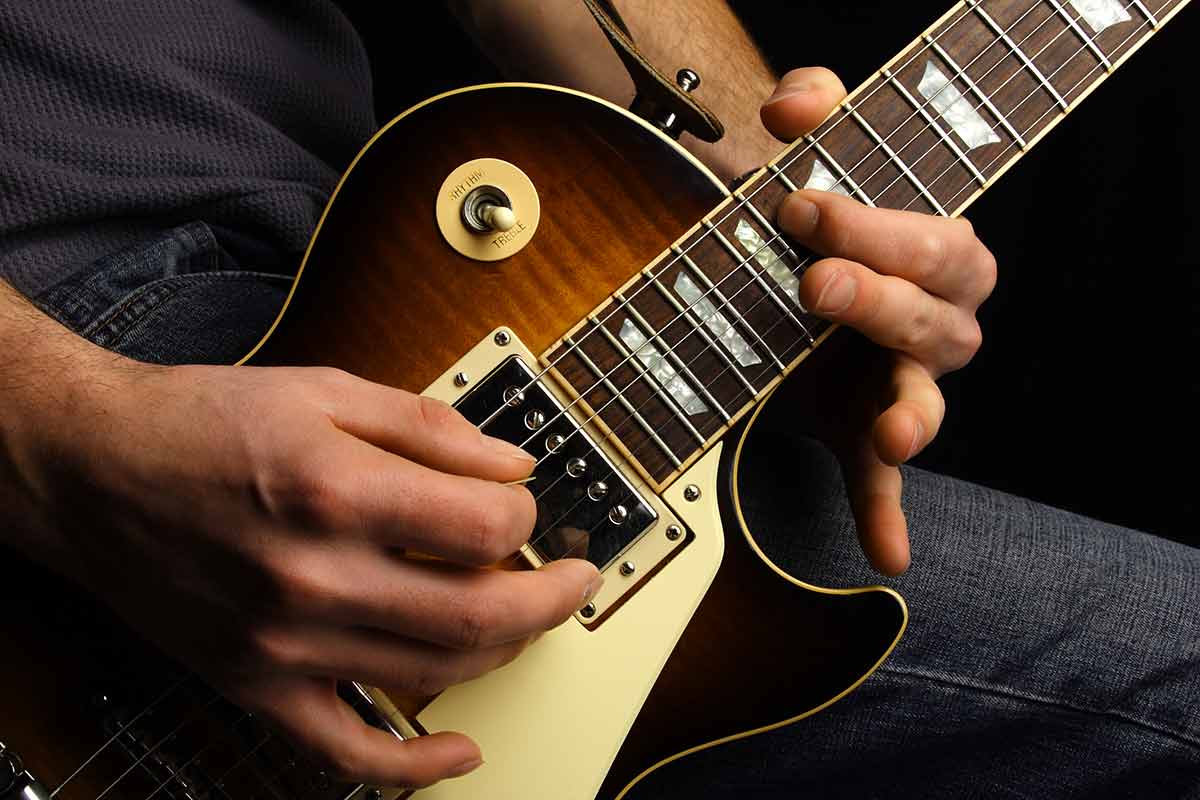 In this scenario, we have an intermediate guitarist who has five years of guitar learning experience behind him. Currently, he owns a Gibson Les Paul. His favourite guitar hero is the classic-guitar-tone-master Slash. He has learned the solo to “Sweet Child O’ Mine'” and knows quite a few things about lead guitar.

His weakness is a lack of theoretical knowledge, and his knowledge of scales is limited to the minor pentatonic scale. His chordal expertise extends to power chords as well as the primary major/minor/dominant chords in open and barré form.

He wants to progress and understand the instrument to a much higher level. He has about 15 hours a week to practice. He’s currently practising about two hours daily.

By following a practice schedule, he will progress in the fastest way possible.

In this example, our intermediate guitarist has spent most of his time on his favourite Slash solo. While it’s a beautiful solo, and a cool thing to play, he did it without any plan or journal. There were no notes (historical notes) to state what top speeds he reached today or which exact parts he struggled with. It was merely a trial and error give-it-a-shot type of practice session.

Working for 10 minutes on his bending vibrato is a delightful idea, but without any structure, it will not yield the best returns.

He tried the latest riff out of a guitar magazine – this is once again part of a “musical dessert” and not “solid meat”. This is the sort of thing to keep at the end of a session as a reward.

Haphazardly memorising a lick from a guitar magazine does not mean much. It might be useful, he might forget it tomorrow. Who knows? – only time will tell.

This sort of method is brilliant if you want to stay in a rut and develop terrible habits. He’ll complain about his picking technique and the fact that he struggles to know what to do next.

The big issue at stake here is probably the lack of a terrific guitar teacher and mentor. A lot of intermediate guitarists could become proficient guitarists if they had an excellent teacher. Practising in the above way will only lead to deep frustration and slow progress is inevitable.

After a couple, of years of practising with a precise schedule most of the time, this intermediate guitarist will become a semi-pro, and if he continues, he will become a professional (virtuoso) guitarist.

Well done to him is all I can say! 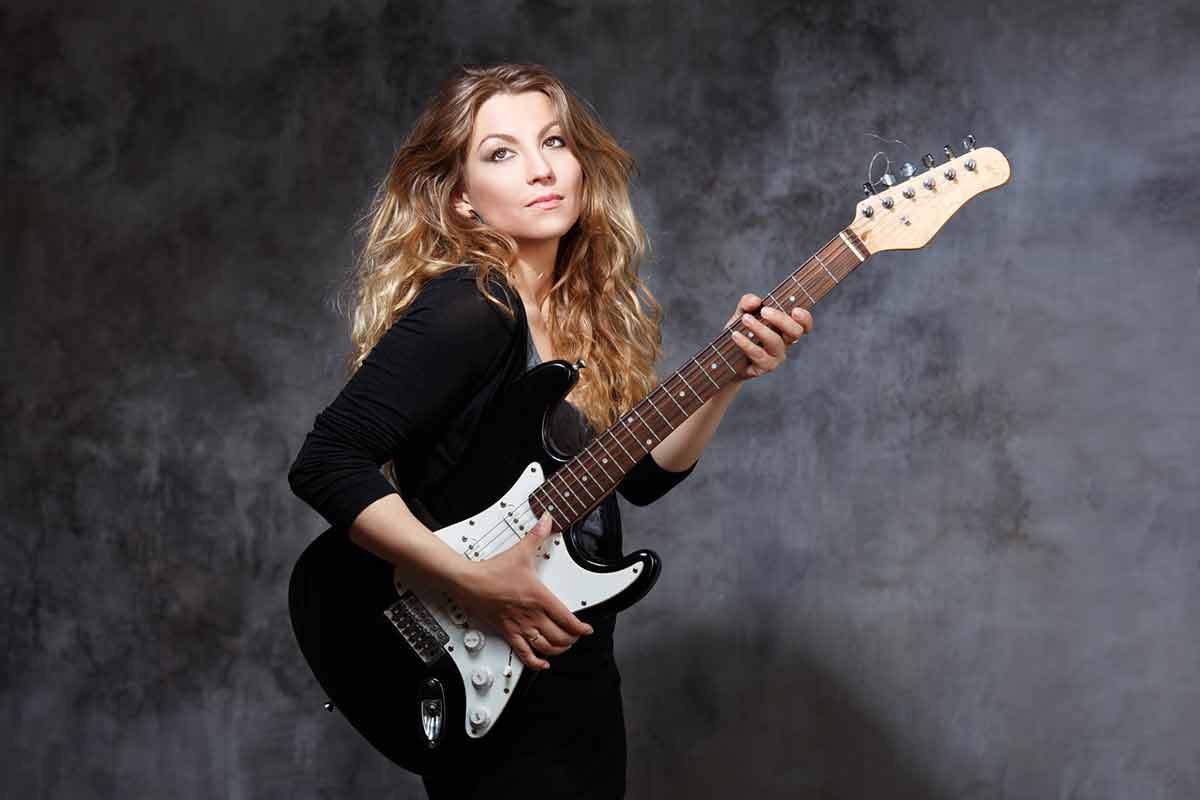 In this scenario, we have an advanced guitarist.

She is familiar with improvising in the blues and pentatonic scales as well as most of the modes of the major scale. Having achieved a high level of experience in rock and metal guitar, she is now interested in learning how to play jazz.

She currently lacks the knowledge of knowing how harmonic structures of jazz work. Her improvisations are not “swinging” enough, and she still has a lot to learn in terms of playing over moving chord changes.

By following a practice schedule, she will progress in the fastest way possible.

I wouldn’t say it’s a lousy schedule, but it can be arranged better.

It’s always more prudent to warm up as it will improve the entire session.

Starting with the II V I changes can be a brilliant idea, if planned and practised every day at the same time.

The same applies to everything else our guitarist has done here.

Planning is the key to become a consistent and excellent guitarist over time!

I honestly prefer this schedule. It’s well-thought-out and will undoubtedly produce the desired results. Significant improvement comes with proper planning and skilful work. Her II V I’s were practised to perfection. (“II V I” is the most respected progression in jazz as almost everything moves in the direction of fourths).

She had a small coffee break and after that practised her repertoire, chords and improvisation. You will notice that she hasn’t spent much time practising left or right-hand coordination. Technical exercises are always a sound idea, but as our guitarist in this scenario has quite a high level of technical skill, it’s probably more prudent for her to concentrate on the musical side of things.

As I said before, a proper schedule will improve your playing much more than practising in an impromptu style. If you want to become an excellent guitarist, then be disciplined in your approach; otherwise, the hope of success will be dim.

Even if, you only intend to play the guitar for your pleasure, practising your instrument with a schedule will get you the best bang for your buck. Your return on time invested will far outweigh your return on impromptu practice time divested!

For a guitarist with an extraordinarily limited amount of practice time available, it’s undoubtedly imperative to follow a practice schedule as carefully as possible. As a dear friend used to say, prioritise ruthlessly!