How to use the circle of fifths in your guitar practice

About the Author: Cameron Hayes

Cameron Hayes is a guitar educator at The London Guitar Institute, teaching a wide range of styles such as rock, metal, blues, jazz, folk, RnB, acoustic, and many more! He teaches a large volume of students on a weekly basis and always looks to provide outstanding value in each and every lesson!

What is the circle of fifths?

The circle of fifths has been a staple of music theory knowledge almost since the dawn of time and shows us the relationship between the 12 different keys and how they relate to each other. By moving up in fifths of each other, we make our way around the circle to eventually end up back at the original key that we started in.

A fifth is an interval of seven semitones or three and a half tones in the musical alphabet, which is regularly used in all genres of music and music theory. Understanding how to identify and use this interval will be crucial to understanding the circle of fifths since as the name suggests, all notes are a fifth apart from each other. Let’s take a C note on your instrument, then go clockwise around the circle of fifths to G the next note. The distance between C and G is a perfect fifth. This same distance can be applied from G to our next note, D, up a fifth from D to A and so on. As an exercise, try and play a fifth up from each note starting on C, and follow the circle of fifths clockwise around the diagram to double-check you have calculated the fifth interval correctly.

After our starting point of C, we will eventually end up back at C again since the circle of fifths contains twelve spaces for the twelve keys in the musical alphabet.

I would recommend going through this process of travelling up a fifth from each note around the circle a few times if this is a new concept for you, both yourself and with your tutor.

You can click on the image, then right-click and save the image to your computer to use for your private practice! 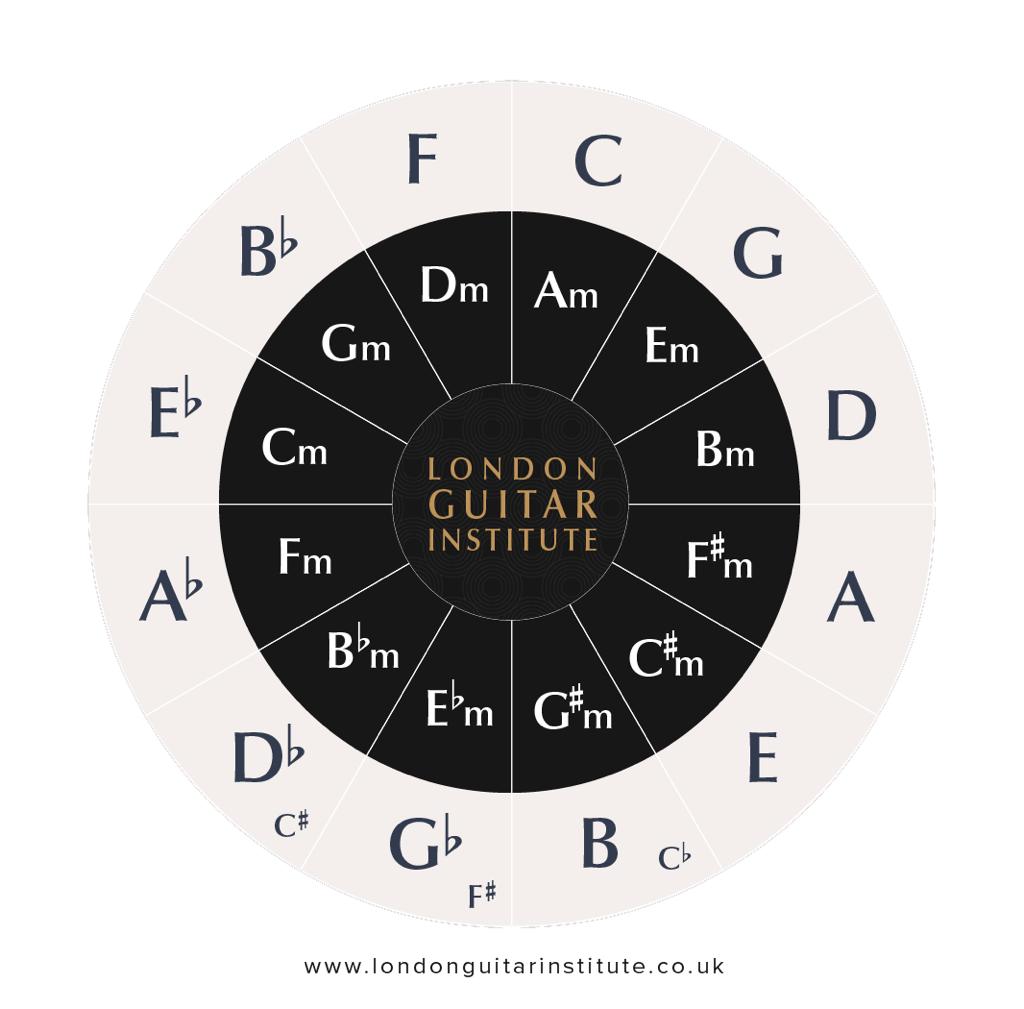 The inner circle of the circle of fifths shows the corresponding relative minor keys for each major key on the outer circle. All of the keys that we have been looking at so far starting from C have been major keys, so from C major to G major to D major and so on. If you are not familiar with the concept of relative major and minor, this is the minor key that will contain the same notes to that of its relative major. If you take the key of C major, its relative minor key in the inner circle is A minor. This is because both C major and A minor contain the same notes, no sharps or flats.

On the piano this would be all the white keys, so if you wanted an A natural minor scale you would play A to A with no sharps or flats, and if you wanted a C major scale you would play C to C with no sharps or flats. Alternatively, you could take your major key to then find the relative minor by going down a minor third (or three semitones) from your major key. On the guitar this would be the space of three frets, since the distance between each fret on the guitar is a semitone. The circle of fifths will work in the exact same way for the minor keys, just starting on a different note. So from A minor, we go up a perfect fifth to arrive at E minor, then a perfect fifth up from there to get to B minor and so on.

This can be useful when improvising to figure out which scales go together to give you more options of positions or approaches to use in your solos. For example if you are improvising using an A minor scale, by finding the relative major of C major scale this will give you more ammo of scales to use, and may change your approach/sound for something a little different.

The circle of fifths can also be useful in your scale practice. For example, if you are practising the major scale and want to try it in different keys, try using the circle of fifths for this. Start in C major, then go to G major, then D major and so on. Because the perfect fifth interval is wide, this will put the major scale in very different positions on your instrument and will make you focus on what key is coming next. Allow yourself a bit of time in-between at first to think about the next key, but once you have done this a few times try this to a metronome to force yourself to quickly recall the next key in the circle to improve your ability to think in fifths. This can of course be done for all scales as well as the major scale.

The same exercise can be done on the guitar, but each time you change key try to stay in the same position on the neck. For example, when changing from C major to G major, don’t jump from the 8th fret down to the 3rd fret on the neck for your root notes, start playing G major from the 10th fret on the A string with your pinky to keep everything in one central position. Try to stay in one position as much as possible through the entire circle of fifths to highlight some positions of the major scale that you may be less familiar with.

The circle of fifths also comes in very handy when figuring out how many sharps/flats are needed for the key that you are looking for. This is particularly handy when sight-reading music notation on the guitar to know what accidentals will be present in the key, or if you are writing some music on manuscript paper and want to know what sharps and flats will be present for your key.

The key of C major (where we usually start in the circle of fifths) does not have any sharps or flats written in the key signature, meaning there are no accidentals present. This would mean no black keys on the piano. As we move clockwise around the circle, we add one sharp for each key. So for our next key in the circle, G major, this will have one sharp in the key signature. The sharp note in this key is an F#.

Knowing the order of sharps and flats is another reason to use the circle of fifths. The first sharp in the key signature is always F, then follows this order:

A rhyme that I was taught to remember the order of the sharps is “Father Charles Goes Down And Ends Battle”. The order of sharps also works in the circle of fifths starting from an F note, so if you wanted to know what the second sharp note was for our next key you could just move up a fifth from F# to C# to G# and so on.

Try to work out the key signature of the rest of our keys.

Now you may be thinking, but what about the flat keys? As you may know, some keys will have a flat (b) key signature, meaning the above rhyme or order won’t apply. If you move anti-clockwise around the circle of fifths, this will actually give us the same effect for finding the flat keys. If we move anti-clockwise from C major to F major, this would mean that F major would have one flat, then Bb would have two flats, then Eb major would have three flats and so on.

Notice how the above is the order of sharps but in reverse?

This would mean that:

If you take a tune such as the jazz standard “How High The Moon” by Morgan Lewis, the start of the tune consists of a series of ii V I chord progressions (have a read on our ii V I article to learn more about this!). It starts on a Gmaj 7 chord, then modulating to a Gmin 7 chord to then go up a perfect fourth to a C7 chord, to then go up a fourth again to an Fmaj 7 chord. This would be a “ii V I” in the key of F major, with all root notes ascending by a fourth to reach the next root note. You could think of this either going anti-clockwise through the circle of fifths or clockwise through the circle of fourths.

This can tie in with the scales practice around the circle of fifths as we were practising earlier! Instead for this let’s use the arpeggios off of each chord. The first chord is a Gma7, so we will play the arpeggio off of this chord. We will then change to a Gm7 as the tune modulates into the new key, to then play a C7 arpeggio followed by a Fma7 arpeggio, and so on. The tune actually stops this movement on the Ebma7 chord, but why not try and continue this root movement right around the circle to arrive back at the starting point of Gma7. By doing this we are actually practising these arpeggios in fourths, although you could use the circle of fifths in reverse to find the next root note. Alternatively, you could just use its sibling, the circle of fourths.

Have a go at adding the circle of fifths into your scales practice, music theory or sight-reading!